Eddie and The Hot Rods 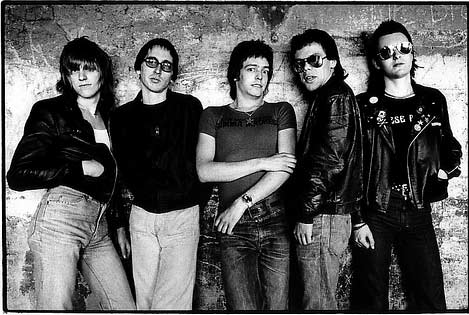 This year sees the 40th Anniversary of one of the finest bands to stem from Canvey Island - Eddie and The Hot Rods (Dr Feelgood are of course the other one).

Quit This Town / Distortion May Be Expected, 1978.

Media Messiahs / Horror Through the Straightness, 1978.

Posted by Doug at Soundtrack4Life at 04:53 No comments:

In honour of the birth of Steve Marriott Today's Playlist revolves around him and his music.

Posted by Doug at Soundtrack4Life at 10:27 No comments:

The Albums
Posted by Doug at Soundtrack4Life at 09:00 No comments:

Born on this day in 1964
Happy Birthday
Roddy Frame.

Posted by Doug at Soundtrack4Life at 07:41 No comments:

This Is How The World Will End

The Elms were an American rock and roll band known for their breed of rootsy, blues-based rock, with the essence of the music of the 60s and 70s. Although the band had been in existence since 2000, 2001 saw the release of their first full-length album, with the first musical contribution from Thomas Daugherty on guitar. Thus, 2001 is widely considered The Elms' first fully functional year in existence. Some members reside in the southern Indiana city of Seymour, Indiana. The Elms have drawn stylistic comparisons to The Black Crowes, Tom Petty and the Heartbreakers, The Kinks, and The Beatles.

Listen To 'The Big Surprise' Here.

Listen To 'The Chess Hotel' Here.

The band's final album, 'The Great American Midrange', was released on September 15, 2009. It peaked at #18 on the Billboard Heatseekers chart and was The Elms' highest-charting album to date. The only officially released single from 'The Great American Midrange' was the song 'Back To Indiana', and the track's music video premiered online in November 2009. On June 1, 2010 the band announced via their web site that they would disband in July 2010.

Posted by Doug at Soundtrack4Life at 06:59 No comments:

The original members of Delta 5, Julz Sale (vocals/guitar), Ros Allen (bass) and Bethan Peters (bass), formed the band "on a lark", but soon became a part of the thriving Leeds post-punk scene, and later added Kelvin Knight on drums and Alan Riggs on guitar. Combining feminist politics with a two-bass funk-punk sound (much in the style of another, more famous Leeds band, Gang of Four), they released their debut single in 1979, 'Mind Your Own Business'. This song was later covered by Chicks on Speed, Le Shok, R. Stevie Moore, Pigface and Dum Dum Girls. Bethan Peters went on to play on Fun Boy Three's second album, 'Waiting'.

Delta 5 were also important figures in the Rock Against Racism movement, and were the subject of a highly publicized assault at the hands of a right-wing group affiliated with rival movement Rock Against Communism.

After the release of second single 'You', the band went on a successful tour of the US, and soon thereafter left Rough Trade for Charisma Records imprint Pre. They recorded their debut album, 'See the Whirl', which suffered from overly clean production, and received low marks both critically and commercially. Because of the failure of the album, the group disbanded. A cover of 'You' (with Japanese lyrics, and renamed 'Saboten' (Cactus)) was recorded by Shonen Knife and released on the band's 1982 debut 'Minna Tanoshiku'.

In 2006, Kill Rock Stars released a compilation of early Delta 5 material called 'Singles and Sessions 1979-1981', capitalizing on the reemerging popularity of post-punk bands like Gang of Four and Wire. The set includes a wealth of unreleased material, along with BBC radio sessions and live cuts.

Mind Your Own Business / Now That You're Gone.

Powerlines / The Heart is a Lonely Hunter.

Posted by Doug at Soundtrack4Life at 16:03 No comments:

Warning: The Video does contain some bad language.

Initially Demolition 23 was a covers band playing live shows in New York with Monroe and Hening joined by accomplished session drummer Jimmy Clark. Their shows were notable for guest appearances by music industry friends such as Sebastian Bach and Kory Clarke.

Demolition 23's eponymous debut album was recorded at Power Station Studios in New York City and produced by Little Steven. Monroe's former Hanoi Rocks bandmate Sami Yaffa played bass guitar on the album and the music was a return to Monroe and Yaffa's punk roots with tracks such as Same Shit Different Day, Hammersmith Palais and covers of songs by Johnny Thunders, UK Subs and The Dead Boys. The album was dedicated to the memory of Stiv Bators and released on the Music For Nations label in 1994.

Jay Hening was injured in a road accident in 1994 and after being refused entry to the UK for a tour of Europe was replaced on guitar by Nasty Suicide. With three former members, the touring line-up of Demolition 23 was the closest to a reunion of Hanoi Rocks since that band had split up in 1985. On February 14th, 1995 the former Hanoi Rocks guitarist Andy McCoy joined Demolition 23 for three songs at Tavastia Club, in Helsinki. That date, despite the 2001 rebirth of Hanoi Rocks, marks the only time that the four surviving members of the classic Hanoi Rocks line up (Monroe-McCoy-Suicide-Yaffa-Razzle) have played together since December 1984.

In March 1995 Nasty Suicide announced his departure from the band much to the surprise of Michael Monroe who then decided to split the band.

(Warning: The video does contain some bad language)

Ever since I was a kid there was one guy whose music has always gripped me, and as I got older the music of Dion DiMucci has never been too far away from me, whether it be his solo material or some of the great music he released alongside The Belmonts.

Dion and The Belmonts

I love the fact that at the age of 75 he still actually sounds great (check out what he did for the album 'The Art of McCartney') and maybe not as much as he once did he is still playing live shows. Sometimes it's hard to take it all in, but Dion has been doing what he loves since 1957!

If Bruce Springsteen is The Boss of New Jersey, then Dion DiMucci is, as his song testifies, 'The King of the New York Streets'.

Of all the Rock and Roll Legends whose music that I totally love the sound of Dion DiMucci sits pretty at #2 behind Buddy Holly (I'm sure he won't mind that all!). He is a multi-dimensional artist as well having dipped his toes in the world of Doo Wop, Rock and Roll, Pop, Gospel, Rock and The Blues. He's released a lot over the years, some fantastic, others by no means perfect but containing enough to make it worthwhile listening (though there's been a lot the music critics have been not too pleased with!).

So for today's Alphabet Beats it's really a lesson in the craft of longevity as an artist, so get your pen and paper ready, get your ears and your heart prepared because school is now in session... Posted by Doug at Soundtrack4Life at 14:55 No comments:

The Donnas are an American all-female rock band from Palo Alto, California. They consist of Brett Anderson (lead vocals), Allison Robertson (guitar, backing vocals), Maya Ford (bass, backing vocals) and drummer/percussionist Amy Cesari (Cesari replaced Torry Castellano, who left in 2009 due to tendonitis). They draw inspiration from Ramones, The Runaways, AC/DC, Bachman–Turner Overdrive and Kiss. Rolling Stone has stated that "the Donnas offer a guileless take on adolescent alienation; they traffic in kicks, not catharsis, fun rather than rage". MTV has stated that the band offers "a good old-fashioned rock and roll party". After gathering a cult following in the punk scene since their 1993 debut, the band achieved major label commercial success in the early 2000s and afterward as their music mixed punk, metal and classic rock sounds.

It was reported that they were recording a new album in 2012 but no news since! Their last show was also back in 2012 in Iowa.

More Donnas
Take It Off.
5 O'Clock in the Morning (Live in Toronto).
I Don't Want to Know (Craig Ferguson Show).
Girl Talk (Live in Toronto).
Don't Wait Up For Me.
Round and Round (Live).
Wasted (MTV).
Hyperactive (Live).
Not the One.
Get Off.
40 Boys in 40 Nights.
Strutter.
Live in Germany.
Live at Colney Island High 1998.
Riding the Rocket (from their first gig!).
Posted by Doug at Soundtrack4Life at 10:52 No comments:

Is easy to forget that over the years that Dr Feelgood actually had some fantastic singles and so for an Alphabet Beats Bonus here's their Singled Out Box Set of A's B's and Rarities.

Posted by Doug at Soundtrack4Life at 10:37 No comments:

Should they be listed as D or F, the debate rages on. For me it has to be D.

For the purposes of this blogpost I have decided that the era of 1974-77 is the focus. That was the time when Wilko Johnson was in the band and they made some of their finest music. A couple of albums after he left were not bad (after all Lee Brilleaux made up a little for the absence of their original guitarist).

The only audio music on today's post is the 'All Through The City' Boxset that contains the first four Dr Feelgood albums: Down By The Jetty, Malpractice, the fantastic live outing Stupidity and Sneakin' Suspicion and a bunch of demos etc. 70 Tracks in all.

The Darling Buds formed in Caerleon near Newport, South Wales, in 1986, by the then 19-year-old Andrea Lewis. Their debut single, "If I Said", was released on February 1987 and was well received. The group re-released the single on an established label, Native Records, receiving radio play on John Peel's BBC Radio 1 show. Signing with Sony in 1988, several singles preceded their critically acclaimed 1989 debut LP, Pop Said....

Click on the links to enjoy the sparkle! I cannot vouch for the quality of all the live videos, some are good, some are a bit rough but I hope that does spoil it too much for you.

Live at Town and Country Club 1989


Just To Be Seen.


You've Got To Choose.


Let's Go Round There. Burst.
It Makes No Difference.
Please Yourself.
Shame On You.
Turn You On.
Let's Go Round There.
Hit The Ground.
Fall.

I shall be attending this weekend in April. I'm very excited about it as it's been many years since I last saw them in concert.
Posted by Doug at Soundtrack4Life at 08:30 No comments: